The Democracy at Work Institute and the National League of Cities have developed The Municipal Playbook for Employee Ownership to assist with integrating employee ownership into municipal economic and workforce development strategies. It offers three approaches that address specific pain points faced by many municipalities:

Author(s):
Mo Manklang, Zen Trenholm, Olga Prushinskaya
Year:
2020
SPACING
In this moment of crisis, worker cooperatives are a reliable, proven solution to address the loss of jobs and income inequality.
COVID-19 has devastated the small business community, and the clock is ticking on permanent shutdowns of small businesses. 45 percent of businesses believe they have less than six months until a permanent shutdown is unavoidable. Tens of millions are still unemployed. Millions of Americans will fall off an “income cliff” when unemployment benefits end.
Author(s):
Sherman Kreiner
Year:
2013 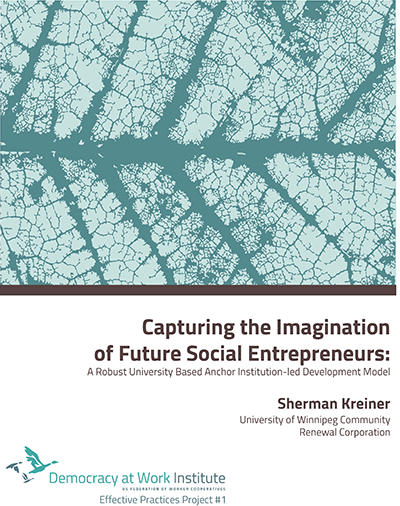 This is an overview of the University of Winnipeg's anchor-led model for community economic development. It positions the Winnipeg model as a robust example of an anchor institution strategy, and includes a broad survey of US worker cooperative development and movement-building efforts of the last 30 years.

Author(s):
Jenna Allard, Carl Davidson, Julie Matthaei
Year:
2013
This book is an anthology of reports and papers from the 2007 U.S. Social Forum. It shares a wealth of new economic alternatives springing up in the USA and globally.
Author(s):
Johnston Birchall and Lou Hammond Ketilson
Year:
2009
This report will provide historical evidence and current empirical evidence that proves that the cooperative model of enterprise survives crisis, but more importantly that it is a sustainable form of enterprise able to withstand crisis, maintaining the livelihoods of the communities in which they operate. It will further suggest ways in which the ILO can strengthen its activity in the promotion of cooperatives as a means to address the current crisis and avert future crisis.
Author(s):
Sherman L. Kreiner
Year:
1989
PACE of Philadelphia has used an extremely "targeted" strategy for developing worker-owned enterprises in the food business. Our results include a food-brokerage company, a lobster plant and distribution warehouse and a network of supermarkets (the O&O Store) in the Philadelphia area. The O&O stores are formally linked through a second-degree co-operative which sets standards for use of the trademark and tradename, establishes requirements for technical assistance, facilitates deals for goods and services for all stores and serves as a locus for discussion of common problems.
Author(s):
Erbin Crowell
Year:
2010
[Excerpt] Toward the end of my time with Equal Exchange, I came into contact with members of the co-ops that make up the Valley Alliance of Worker Co-ops (VAWC). I was impressed by the tradition of collective management among these co-ops and the manner in which they had come together to begin developing a network of mutual support in their region. The number and diversity of the enterprises represented in the network was very different from my experience of worker co-ops as isolated enterprises.
Author(s):
UNRISD
Year:
2010
The UNRISD research agenda for 2010–2014 is grounded in a particular understanding of social development, including not only improvements in material well-being but also progress in relation to equity, social cohesion and democratic participation. Over the past decade, UNRISD research has focused on how social policy contributes to development.
Author(s):
Matt Hancock
Year:
2005
Immediately following World War II, Emilia-Romagna was one of the last regions in Italy in terms of standard of living. Today, Emilia-Romagna is one of the top 20 most prosperous regions in Europe. Emilia- Romagna has the highest per capita income in Italy and the most equitable distribution of wealth: wages are high, and the difference between rich and poor is lower than anywhere else on the peninsula.
Author(s):
Nancy Neamtan
Year:
2002
The social and solidarity economy are concepts that have become increasingly recognised and used in Quebec since 1995. Following the examples of certain European, as well as Latin American countries, these terms emerged in Quebec as part of a growing will and desire on the part of social movements to propose an alternative model of development, in response to the dominant neo-liberal model. The emergence of this movement has not been without debate, nor obstacles. In fact, the contours and composition of the social economy are still being determined; its definition continues to evolve.