Posted on June 26, 2015
As cities throughout the country explore innovative ways to invest in building economies that meet the needs of all residents in sustainable ways, New York City is leading the way by supporting the development of local, worker-owned businesses. On June 23, 2015, the City Council approved a second year of funding for the Worker Cooperative Business Development Initiative, expanding its commitment to support cooperative businesses that are owned and controlled by residents of New York City.  All of the wealth generated by these small businesses – from profits and wages to tax revenues – stays grounded in the city, building a stronger local economy throughout the Five Boroughs. 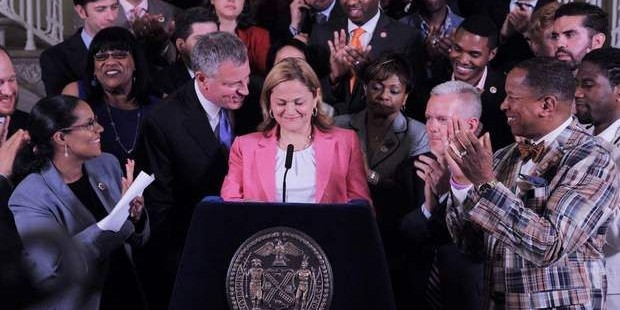 The current funding for $2.1 million is a 75% increase over last year’s grant of $1.2 million, and follows supportive legislation passed in March requiring the city's economic development arm to track municipal support of worker cooperatives. At the bill signing in March, Mayor DeBlasio described the importance of worker cooperatives in addressing inequality, saying, “Worker cooperatives historically treat their employees with respect and ensure that all people who work in the firm are able to benefit from their hard work, something that we do not see enough of in this country.”

Council Members Helen Rosenthal and Maria Carmen Del Arroyo have been the primary advocates for the Worker Cooperative Business Development Initiative within City Council, and their support made the renewed funding possible.

Melissa Hoover, the Executive Director of the Democracy at Work Institute, said, “New York City has stepped up as a national leader in addressing inequality, inspiring cities throughout the country to consider this approach.”

Madison, Wisconsin is one of the cities that has taken notice of the initiative in New York. In November of 2014, five months after the pilot funding passed in New York City, Madison initiated a budget item allocating $5 million to cooperative development, making $1 million available each year for five years starting in 2016. Although the budget is yet to be approved by city council, advocates close to the process are optimistic that Madison will soon have its own worker cooperative initiative.